The link between air pollution and it’s effects on cardiovascular health and lung diseases like asthma are well established, but a new study finds high levels of particulates in air pollution affects mental health as well. The negative effects may be attributed to behavior changes of people living in polluted areas, such as spending less time outside, or leading more sedentary lifestyles which then can lead to psychological stress or social isolation.

While pollution consists of many components, this study focused on measurements of fine particulate matter, which is produced by car engines, wildfires, fireplaces and wood stoves, and power plants fueled by coal or natural gas. Fine particulate matter (particles less than 2.5 micrometers in diameter or PM2.5) is easily inhaled, can be absorbed into the bloodstream and is considered a greater risk than larger particles.

Heavy Bay Area commute traffic, truck traffic, industry, and oil refineries all contribute to elevated PM2.5 and other pollutants. There are numerous resources to help identify when exterior pollution levels are elevated so that we can limit our exposure.

Air Pollution Effects Higher Inside Your Car Than Outdoors

A 2017 study measured air pollution levels inside cars during morning commutes in downtown Atlanta, GA.  The study measured PM2.5 and oxidative byproducts of PM2.5. Levels measured inside cars were up to twice as high as those measured by roadside sensors.

The chemical composition of exhaust apparently changes very quickly, so roadside sensors may not accurately convey the real exposure.Sunlight also heats pavement which causes updrafts carrying pollution higher into the air, and into drivers’ breathing zones. Another effort to quantify exposure to pollutants not represented by stationary air monitors was a partnership between the Environmental Defense Fund and Google Street.

This map of Oakland demonstrates how pockets of higher pollution form. The data was collected daytime on weekdays, and sampled each road an average of 30 times.

How to Protect Yourself From Rush Hour Air Pollution

You can protect yourself to a degree by keeping windows closed and ventilation off while idling at stop lights and stuck in stop and go traffic.  A study looked at particulate concentrations in three size ranges (PM10, PM 2.5, and PM1.) entering the cabin of vehicles during stop and go traffic. Coarse particles (PM10 to PM 2.5) are assumed to come from road abrasion and tire and brake wear, while PM 2.5 and smaller are assumed to come from vehicle emissions.

For information on how proximity to roadways impacts indoor air quality in our homes, see this blog on Indoor Air Pollution Near Busy Roads.

For more information on indoor air quality or to schedule an assessment for your home or office contact us here. 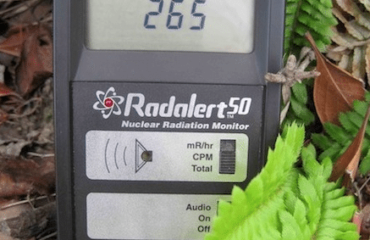