Are you concerned about possible Carbon Monoxide being present in your home or environment?

Below is a list that will help you stay safe.

Too often we get calls to our environmental consultants and hear misunderstandings about carbon monoxide (CO). Here are some carbon monoxide facts and common myths broken down.

I can smell carbon monoxide when the furnace is on.

CO is actually colorless, tasteless, AND odorless. Because it cannot be noticed without a detector or meter, CO has earned the dubious name of “silent killer.” When folks call and say they can “smell carbon monoxide,” they are usually referring to other combustion byproducts that the human nose can detect. If you can smell combustion byproducts there is a problem that should be addressed ASAP. 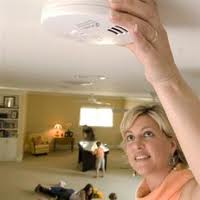 Carbon monoxide is heavier than air, so CO detectors should not be placed on the ceiling or high on the wall.

CO is slightly lighter than air. However, studies have shown no significant difference in measurements based on what height CO detectors are mounted. Different manufacturers recommend different mounting locations, and you should always follow the manufacturers’ recommendation.

CO has a molar mass of 28.0, and air has an average molar mass of 28.8. The difference is so slight that CO is found to evenly distribute itself indoors. It is worth mentioning that CO indoors is usually generated from incomplete combustion (heat source) and therefore traveling in a warm air stream. Warm air is more buoyant and does rise. Coupling this fact with the knowledge that CO is lighter than air…  I personally have my CO detector located on the ceilings.

Placing the alarm in a high area of the home, where smoke and hot air would collect during a fire, seems like the most logical advice for me. I have heard that air can stagnate in some corners, so it’s advised not to install a smoke or CO alarm within 16″ of the side wall or ceiling. In other words, if you’re going to install it in a hallway, put it in the center of the hallway ceiling – not too close to a side wall.

The National Fire Protection Association says CO detectors “shall be centrally located outside of each separate sleeping area in the immediate vicinity of the bedrooms.” Additionally, each CO detector “shall be located on the wall, ceiling or other location as specified in the installation instructions….”

Council (section R315.1) pretty much mirrors the above language. “For new construction, an approved carbon monoxide alarm shall be installed outside of each separate sleeping area in the immediate vicinity of the bedrooms in dwelling units within which fuel-fired appliances are installed and in dwelling units that have attached garages.” If there are no combustion appliances, then CO detectors are not required by this code.

California Senate Bill 183 requires CO alarms for any dwelling unit with a fuel-burning appliance, fireplace or attached garage. This accounts for the vast majority of residential buildings in CA. Effective in 2011 all new and existing single-family construction must install CO alarms, and in 2013 all multi-family dwelling units were required to be outfitted with CO alarms.

LEED-H requires CO alarms and offers points for outfitting garages with a minimum 100 cfm exhaust fan, per bay, in order to reduce the risk fo CO poisoning. The exhaust fan should run continuously (energy hog) or may be connected to the garage door opener, motion detector, or CO sensor. Carbon monoxide is not dangerous.

CO poisoning is the most common type of fatal indoor air poisoning in countries where cooking and heating is still dominated by fires. More than 500 Americans die each year from unintentional carbon monoxide poisoning.

Symptoms of mildly acute CO poisoning include lightheadedness, nausea headaches, fatigue, and flu-like symptoms. Acute CO poisoning leads to sleep and the failure of the central nervous system and heart – leading eventually to death during sleep. The following chart from Wiki summarizes known human symptoms associated with different levels of CO exposure. If we detect ANY CO indoors, we consider it an immediate action.

Carbon monoxide poisoning is like any other kind of poisoning.

CO bonds to hemoglobin (Hb), and instead of carrying oxygen (O2) the hemoglobin is then occupied with CO – creating carboxyhemoglobin (HbCO). CO poisoning is actually the result of the head and heart not receiving sufficient oxygen… or asphyxiation.

If a person is removed from a high-CO environment after acute CO poisoning they may still suffer difficulty with some mental functioning such as short-term memory, dementia, amnesia, irritability, an unusual walking gait, speech impairments, and depression. I’ve spoken with people that said it’s taken them months to fully recover their mental functioning after an acute exposure event to carbon monoxide.

Carbon monoxide detectors are in perfect working order if they beep when I push the test button.

Most CO alarms sold today in the US will not sound an alarm until concentrations greater than 50-70 parts per million (ppm) are reached. Many believe CO alarms should signal at far lower levels. In fact, the Building Biology guideline is that indoor CO should never exceed outdoor concentrations. Where we live, in the San Francisco Bay Area, it is rare to detect more than 1 ppm in outdoor air unless you are standing near an active flue or chimney. The most significant source of human-produced CO is formed during combustion when there is insufficient oxygen (O2) to produce carbon dioxide (CO2). Imagine where this scenario may take place… does a hot water closet come to mind? How about a furnace located in a crawlspace or attic? Or a poorly vented kitchen with a gas stove?

Installing a CO alarm is a low-cost way of significantly reducing your risk of CO poisoning. Do it. It’s inexpensive and easy. Replace the batteries according to the manufacturer’s instructions, and replace units at least every 5 years.

Carbon Monoxide facts should be well known to everyone. Hopefully, these tips will help you reduce the risk of CO poisoning.

Testing for Carbon Monoxide is a standard part of our Healthy Building Inspections. Our contracting arm also offers a subscription home inspection and home maintenance program which includes changing batteries.