Do you want to send your kids to an EMF hot-spot with unknown health ramifications? Are some existing symptoms a result of EMF? Reducing exposure to Electromagnetic Fields or Radiation (EMF or EMR) is a contentious debate in public health and green building circles across the United States.

OSHA does provide rather liberal exposure limits for ionizing and non-ionizing radiation, and the Federal Communications Commission (FCC), in their infinite wisdom about public health, is responsible for establishing safety thresholds for RF exposure in the U.S. Many consider exposure limits for non-ionizing radiation in the U.S. too lenient, but relatively few public health and green building advocacy groups have picked up the battle cry. I was disappointed when the USGBC (LEED) decided not to award a point for EMF reduction… and now I’m happy to see another green building rating system taking the lead.  EMF at high-performance schools is bound to be a hot topic!

Bottom line = EMF does (or is likely to) cause harm, and there are easy measures we can take to reduce exposure. And if there is anyone we should protect… it’s children in schools! Many Americans are astonished to learn that their iPhones wouldn’t be legal in China, because China has more stringent restrictions. Or that there is fine print in the iPhone and Blackberry manuals saying you should hold your cell phone more than 1/2 inch away from your ear.

I do. If U.S. manufacturers are pushing the lenient limits in the U.S… and in their manuals, they are issuing warnings… I’m going to head the fine print!

“But research about health effects from cell phones is inconclusive, right?”

I believe that’s not true.

I believe there is ample evidence to support more stringent exposure limits in the U.S.… like in China, Australia, Sweden, Germany, Israel, etc. The BioInitiative Report is a great compilation of peer-reviewed, published health studies that would indicate the need for much more stringent EMF / EMR regulations in the U.S. Sometimes naysayers point toward industry-sponsored studies that show little or no evidence of causal effects, but take a look at the BioInitiative, just like early studies on global climate change… there’s cause for concern right now about EMF/EMR.

There are documented cases of cause-and-effect damages from EMF/RF exposure levels commonly found in the U.S. Some experts say that the rapid expansion of EMF/RF radiation without long-term health studies is the largest public health experiment in history. Why roll the dice?

So why aren’t their more stringent regulations for EMF in the U.S.?

I think it’s about money… 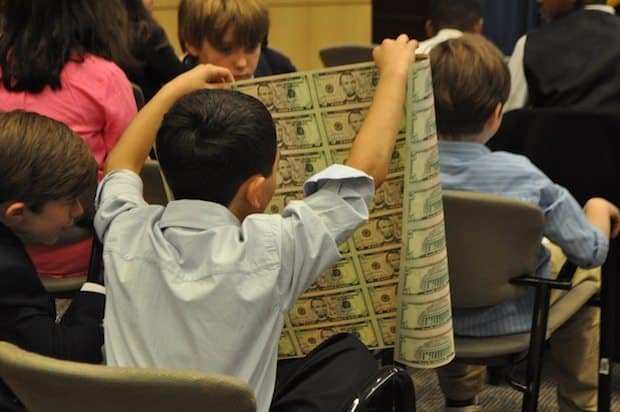 EMF and Money = Kids in Trouble?

Money: I’ve heard estimates that U.S. pensions have as much as 1/3 tied up in telecommunications. That’s a big piece of our money pie! Passing more stringent regulations would:  a) crimp profits, and b) equate to admission that previous safety thresholds were insufficient to adequately protect public health. Historically these have been tricky issues in the public health arena, but when pressure and evidence reach critical mass public policy will follow. Given today’s economic climate… the adoption of protection measures are bound to be even more controversial and slow… You see cell towers and cellular antennas on schools, churches, and hospitals all the time. What do these groups have in common? They’re non-profits struggling to keep their doors open. And when telecommunications companies come knockin’ on their door, “we’ll have these boxes installed on your roof and just send you checks henceforth,”it’s an understandably attractive proposition for administrators fighting the tide of red ink.

And have you ever seen a school right next to a high-voltage power line?  Think that’s prime real estate?  It’s not, and that’s why not-for-profits can afford to move into such locations. They’re cheap – but potentially dangerous.

EMF and CHPS – How to Reduce Exposure Levels

The Collaboration for High Performance Schools (CHPS) has decided to take a stand against EMF in their most recent version of National Core Criteria. Unlike the USGBC and LEED, CHPS is showing leadership by clearly outlining known EMF-reduction strategies in their version 2.0 green school rating system.

EMF at High-Performance Schools may never be the same!

There are two primary sets of criteria under the Indoor Environmental Quality (EQ) credit for “Low-EMF Best Practices:”

We have written extensively about best practices for low-EMF electrical installations, and many of the requirements are almost mirror images from the longer-standing Building Biology Healthy Building Rating System. Here’s a sampling:

These are among the many recommendations we make during EMF Surveys, or as part of our healthy building design consulting, and we’re thrilled CHPS is adding these best practices to their rating system.

If you care about children and schools, or if you think this blog is a bunch of malarkey, I encourage you to review version 2.0 and provide your public comments by August 30th.

Hats off to Toni Stein and the CHPS committee for forging ahead in these new waters. I think CHPS is doing the right thing… and I hope the USGBC and other public health groups follow their lead and promote EMF best practices in schools.