People with asthma and mold allergies are the first to ask about mold testing. Since their symptoms are primarily respiratory, it is only logical they ask for “air quality testing.” Other individuals looking for peace of mind or suffering much more severe symptoms sometimes also ask for mold testing air quality services. This blog is about air quality testing and some of the variables and limitations that should be considered in every mold testing job.

Part of our job is to help develop a mold testing air quality sampling plan specific to your project, and to help interpret the lab results in light of discoveries made during the visual inspection. I’ve heard mold testing described as “an art and a science,” and I agree with that sentiment. Since it’s not a federally regulated contaminant it has been a little bit of the wild west in terms of who tests, what they test for, and how the results are interpreted. For a customer – that should scare you! – because it has meant that anyone could call themselves mold inspectors without having adequate training or professional credentials to demonstrate their competence.

Most experts, including the EPA and California Department of Public Health, suggest only testing under very specific conditions. In general, a moisture and mold inspection by a qualified professional is far more useful in determining if a mold problem exists. However, there are some circumstances that warrant additional air quality testing. The most commonly referred to guidance for how to perform mold inspections and when/how to test for mold is the AIHA “Green Book,” Recognition, Evaluation and Control of Indoor Mold. 1) Determining the scope of contamination.

2) Determine the type of contamination.

If mold testing is pursued, these are the three most common types of samples collected:

So you’ve had an inspection and received the lab results… what does it all mean? Companies that just send convoluted lab reports without further explanation should be put out of business. It is the role of the Certified Indoor Environmental Professional to help interpret the lab results in combination with what was gleaned from the visual inspection.

Sporetrap lab results should include, at the VERY minimum, one outdoor sample and a handful of indoor samples. The outdoor sample is used as a control to compare to the indoor samples. Because there can be such variation in sporetrap samples the statistical significance from collecting so few samples is very limited. Most labs simply share a chart showing how many of which type of genera were present. 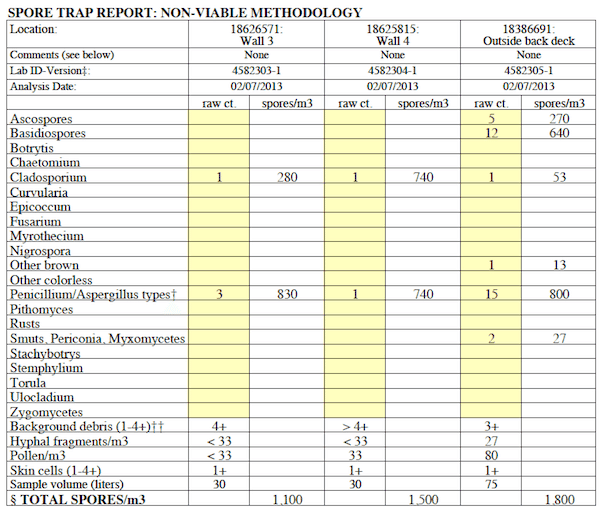 Some labs offer their own “limited interpretation,” such as the MoldScore from EMLab P&K. “MoldSCORE™ is a specialized method for examining air sampling data. It is a score between 100 and 300, with 100 indicating a greater likelihood that the airborne indoor spores originated from the outside, and 300 indicating a greater likelihood that they originated from an inside source…” Below you can see some obvious “spikes” that EMLab identified as statistically significant higher counts of Cladosporium and Pen/Asp indoors compared to outdoors. Some Building Biologists refer back to the Healthy Home Standard for guidance on interpreting sporetrap results: There is much less standardization for interpreting these last two sample types. MVOC results may come with lab interpretation such as this: “Levels below 8 ng/L are typical for most homes and should not cause great concern for healthy individuals. Levels between 8 and 30 ng/L indicate a low level of mold which, generally, affects people who are sensitive to molds. Levels above 150 ng/L indicate that a high level of active mold growth is present and it is likely that nearly all occupants of the home will be affected.” 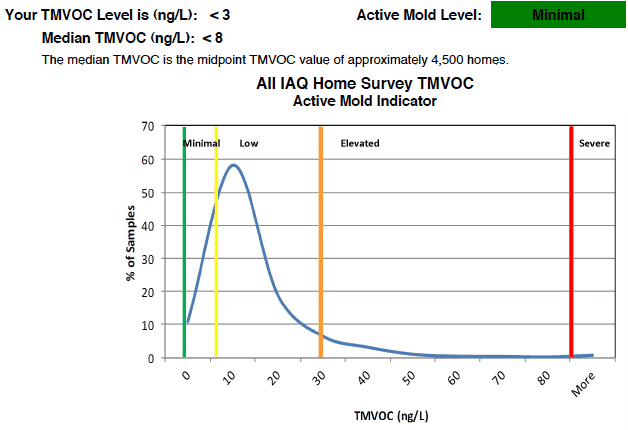 1) Decide if environmental sampling would add value to the case, 2) define a sampling plan that would answer a question or prove/disprove a hypothesis, 3) perform testing in accordance with industry guidelines, 4) only use qualified laboratories with good track records and the appropriate certifications, 5) interpret data in combination with information collected during the inspection, 6) provide the interpretation in a user-friendly manner written to the “right audience.”

Until mold testing becomes more regulated it will remain “an art and a science.”

Healthy Building Science is an environmental consulting firm which provides mold testing and mold inspection services for commercial, residential, multi-family, buildings, offices, industrial and manufacturing workplaces, hospitals and medical facilities, and single-family homes in the greater San Francisco Bay Area and all of Northern California including the cities of San Francisco, San Jose, Oakland, and Sacramento.