EMI and LEDs – Not all LEDs are the same! EMI and LEDs –  Not all LEDs are the same!

Electromagnetic Interference (EMI, aka: “Dirty Electricity,” or “High Voltage Transients”) is a term coined for quick transient pulses, harmonics, spikes and dips in the electrical power in a home’s wiring that deviates from a purely 60Hz sine wave.  These often occur due to computers, other electronics, mini transformers/power convertors, dimmer switches, CFL and LED lighting. Purely resistive loads such as incandescent lighting, electric heating elements and the like, do not contribute to dirty electricity as they do not alter the frequency of the power incoming for their purposes. Here we explore Dirty Electricity from LEDs. 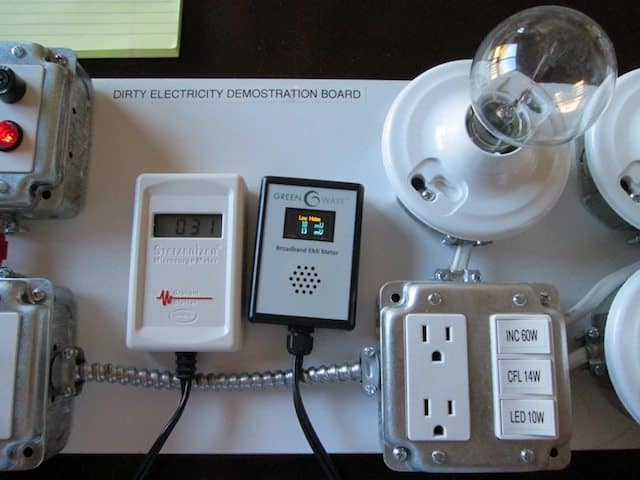 In the act of altering the frequency for their purpose, electronic devices ‘backfeed’ small amounts of electricity back onto the incoming power line, disrupting it.  This can be imagined like a pond with a continuous smooth ripple where other disturbances compound and disrupt that ripple making it ‘choppy’.  You can read more about this phenomenon at Gust Environmental and the US National Library of Medicine and National Institutes of Health.  There are many other websites that also support and attempt to discount this phenomenon. There are several companies on the market that produce dirty electricity filters and meters to attenuate these deviant transient voltages on the power line. The forerunner of these filters and meters is Stetzer Electric Inc. and their leading competitor is Greenwave. Both companies appear to produce dirty electricity filters that perform admirably when measured by their competitor’s own dirty electric meters. Unfortunately, the two companies seem to lash out at each other rather than collaborate in this nascent field. In a later blog we may perform additional research to determine which brand’s filter performs better for various dirty electrical issues.

However, why should you even need to buy filters to remove the dirty electricity?  Not all electronic devices are made the same. If you can make an educated choice and choose devices that produce less dirty electricity, the need for filters decreases.  Your individual need for filters might not reach zero, but you may be able to go with less filters than what Stetzer Electric Inc. or Greenwave recommends.

Dirty Electricity (EMI) Measurements
Using a Stetzer meter and a Greenwave EMI meter, the various dirty electric values of several CFL and LED manufacturers were measured.  Both meters were used since the methods of their quantification of dirty electricity are different.  These CFLs and LEDs were all chosen with the luminosity of near 800 lumens (the equivalent of a 60W incandescent bulb). An incandescent bulb measurement was included in each of the graphs to give a baseline for comparison purposes. CFLs – no filters- measured in millivolts Using the Stetzer meter, in regards to CFLs: GE and Philips again measured better than Ecosmart, though they did produce 10 times more dirty electricity than what was present on the power line already (baseline is the GE Incandescent). Philips CFLs performed slightly better than the GE brand as measured by the Stetzer meter. What do these measurements say to us?  LEDs are not necessarily better than CFLs.  In fact, they can produce many times more, depending on the brand of the LED.

In this research we explored CFLs and LEDs from Ecosmart, Philips, GE, and CREE which were all available from Home Depot. If dirty electricity is a health concern in your home and you are interested in saving electricity and money in the long run, it is recommended that you consider using CREE LEDs based on this limited research.  Further research with different manufactures will be performed in the future to expand the selection of recommended brands.  A direct link to Home Depot’s CREE LED webpage can be found here.

One Response to “EMI and LEDs – Not all LEDs are the same!”